Drought 2016: Relief to save the lives of children

Needy children under the age of five in the district of Mille receive a nourishing supplementary meal of soya and cereal to protect their health and their lives in the drought period. 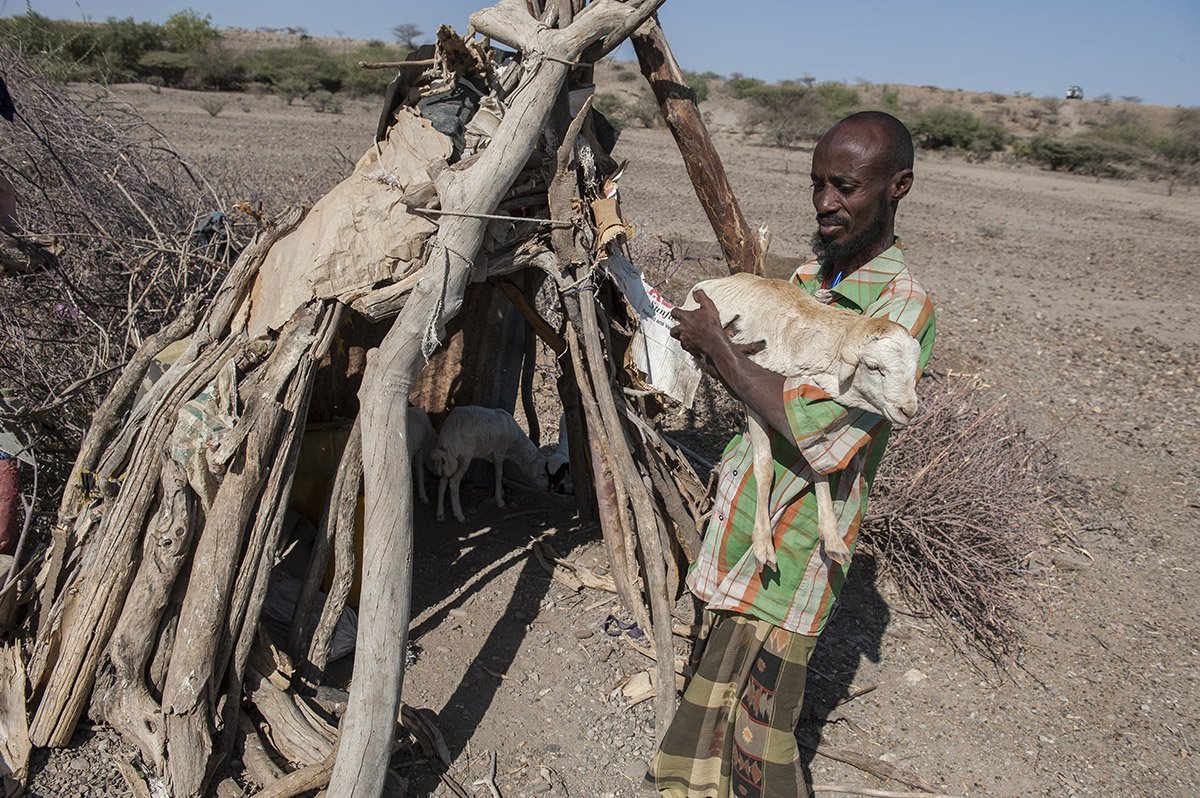 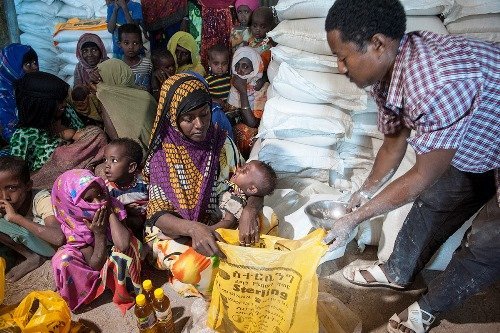 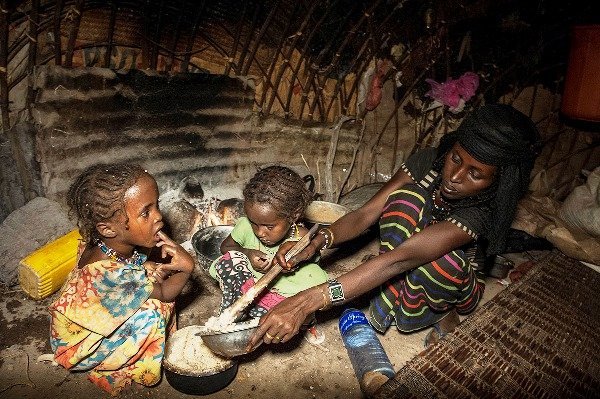 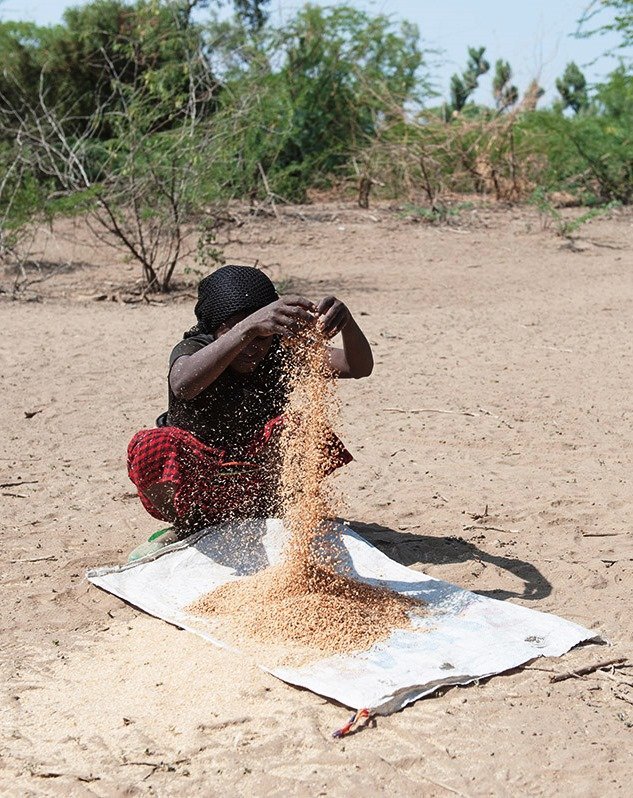 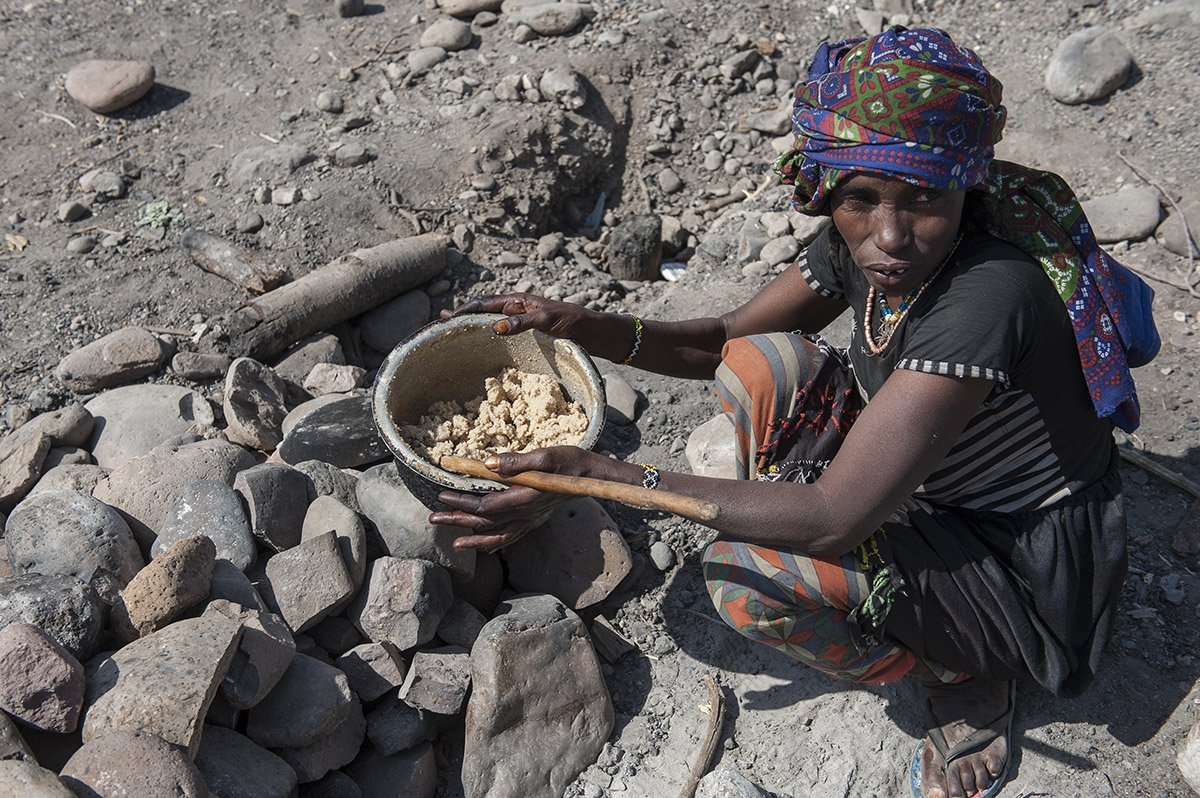 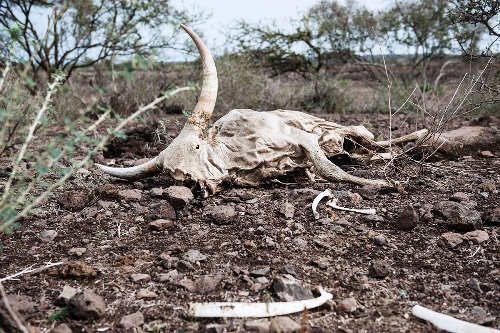 Menschen für Menschen Switzerland is known for innovative projects that model the concept of “help towards self help”. With Ethiopia currently facing the worst drought for decades, the foundation is sidelining its main focus temporarily to provide humanitarian emergency aid.

Faced with the threat of a famine catastrophe, it is working to protect the health and lives of children under the age of five.”I pray for rain every day,” says Meirem Ali, 31, a mother of five children in the Adaytu-naledi community in the district of Mille. “A year ago we still had ten cattle. Now there is only one cow left. All the others died of hunger and thirst. I am doing my best to keep the last cow alive. I walk three hours each day with our donkey to collect water from the next water hole for the children and the remaining goats.” But the animals have stopped producing milk, which means her two-year-old son Abdu and four-year-old daughter Halima are suffering most.

She knows her husband is not in a position to help: “Like the rest of us, he cannot read or write and has no chance of getting a job,“ says Meiram Ali.The food aid provided to Meirem Ali and her children by Menschen für Menschen Switzerland has been a lifeline. In the district of Mille, the foundation is ensuring the health and lives of 6,000 children under the age of five, most of whom are suffering as a result of the biggest drought catastrophe for many decades.

The families are given 4.5 kg Famix per child, a protein-rich powder made of soya and cereal, and half a liter of cooking oil per month. As long as the seasonal rain stays away, Menschen für Menschen Switzerland will continue its emergency aid program. Initially scheduled from January to April 2016, it was extended until August 2016 and will be ongoing until the situation has improved.

In 2015, the rain stopped almost completely in the Afar region in north-east Ethiopia, as a result of the global weather phenomenon El Niño combined with the impact of climate change. Without rain, the grass withered and the livestock perished. Resulting in herding families losing their livelihood too. Livestock sales are the only source of income that enables them to purchase basic food. The poorest families in the Afar region only eat once a day. As a result, the health and development of children under five are particularly affected: every fourth child in Mille showed physical signs of malnutrition at the start of 2016. Dozens of children were treated in the district health center for severe malnutrition. The United Nations reported that around 200 schools in Ethiopia had to close their doors because the herding families and their children had moved to far-away regions in a desperate search for water and food for their livestock. The children face an even greater risk there: lack of food and dirty water bring the threat of infectious diseases and parasite illnesses, that can easily lead to the deaths of the already weak children.