“The Lancet” reports on Abebech Gobena

Humanitarian Abebech Gobena built her life’s work partly with the help of Menschen für Menschen. On her death, the renowned medical journal “The Lancet” has dedicated an obituary to her.

Humanitarian and founder of an organisation to support orphaned and vulnerable children and their communities. She was born on Oct 20, 1935, in Shebel Abo, Ethiopia, and died of COVID-19 on July 4, 2021, in Addis Ababa, Ethiopia, aged 85 years.

When Yitbarek Tekalign began work at the Abebech Gobena Children’s Care and Development Association (AGOHELMA) in Ethiopia, he was told that Abebech Gobena, the Founder and General Manager of the organisation supporting vulnerable children and their communities had recently broken her arm. So on a tour of the facilities, Yitbarek was surprised to find Abebech playing with a group of rowdy children. “She could not be separated from the children, even when she was not feeling well”, said Yitbarek, who is now AGOHELMA’s Communications Manager. “She got involved in all activities and gave courage to everyone in her organisation.” 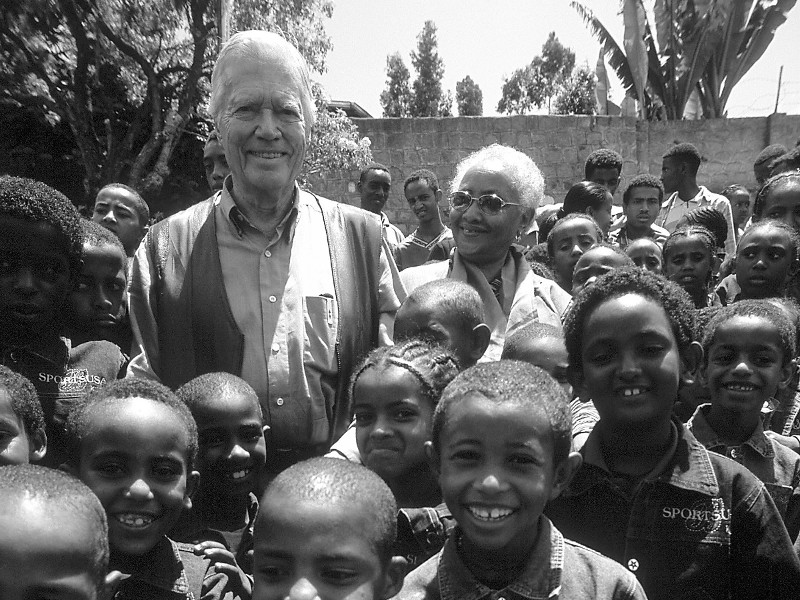 Abebech Gobena with Karlheinz Böhm at the home for parentless children

AGOHELMA grew out of Abebech’s refusal to abandon children in need. In 1980, she made a pilgrimage to Gishen Mariam, a religious site in what was then Ethiopia’s Wollo province. The region was in the midst of a famine and Abebech began distributing food and water to people. She reached a baby and her mother only to discover the woman was dead. She rescued the baby and soon returned to the region when she was given another child by a dying man. “From there she started to build a life for those children who have no family”, said Getachew Zewdu, Ethiopia Country Representative for Menschen für Menschen, a Swiss-based non-governmental organisation that provides support to AGOHELMA. By the end of the year, she had brought 19 more children to live in her home in Addis Ababa. Rejected by her family, she eventually transformed the makeshift orphanage into a national non-profit organisation that not only provides shelter and an education to children without parental support, but also organises workshops for young people to learn job skills, support groups for people living with HIV, and training for health workers. “She is a humanitarian icon and will be an example for the generations forever”, Yitbarek said.

Italy invaded Ethiopia the month Abebech was born in 1935 and her father was killed in the violence. Raised by her mother and her grandparents, she was married to an older man when she was 10 years old. She escaped the marriage and fled to Addis Ababa, where she attended school, secured a series of jobs, and eventually remarried. By rescuing the children in 1980, Abebech put herself in danger. “The government at that time did not want the famine to be public knowledge”, she said in a 2010 interview. “So I had to pretend the children were mine and smuggle them out.” She also earned the ire of her family and her husband, who “advised her to stop”, Yitbarek said. Forced to choose between her husband and the children, she chose the children, supporting them by selling food and jewellery. “She gave up everything for the lives of many children who were in very dangerous and disadvantaged positions”, Getachew explained. “Day and night, she was working to give a better life to the children.”

“She was very devout and very smart”, remembered Girma Berhanu, a former official with what was then known as the Rehabilitation Agency for the Disabled. She applied to the government agency for support soon after rescuing the first children. “She was not highly systematic in the beginning, but she was very ambitious. She wanted to reach as many people as possible”, said Girma, who is now a Professor of Special Education in Gothenburg University’s Department of Education and Special Education in Sweden. With growing support from outside donors, she was able to register as a non-profit in 1986. She also began layering on additional services to support the orphans and vulnerable children and also people from communities around the country, launching efforts that addressed everything from health to income generation to the environment. “The humanitarian activity that she started in a poultry house has grown and is now involved in many development activities”, Yitbarek explained.

Although Abebech served as General Manager of AGOHELMA, she did not draw a salary and lived in relative poverty. “She gave all of her property to the organisation”, Yitbarek said, and eventually turned the governance of AGOHELMA over to its members. “She was this extraordinary woman”, he said. Known as Emaye, which translates as wonderful mother, Abebech is survived by the more than 100 000 children who benefited from AGOHELMA’s services.

If you prefer to read the article of the medical journal “The Lancet” as a PDF, you can download it here: