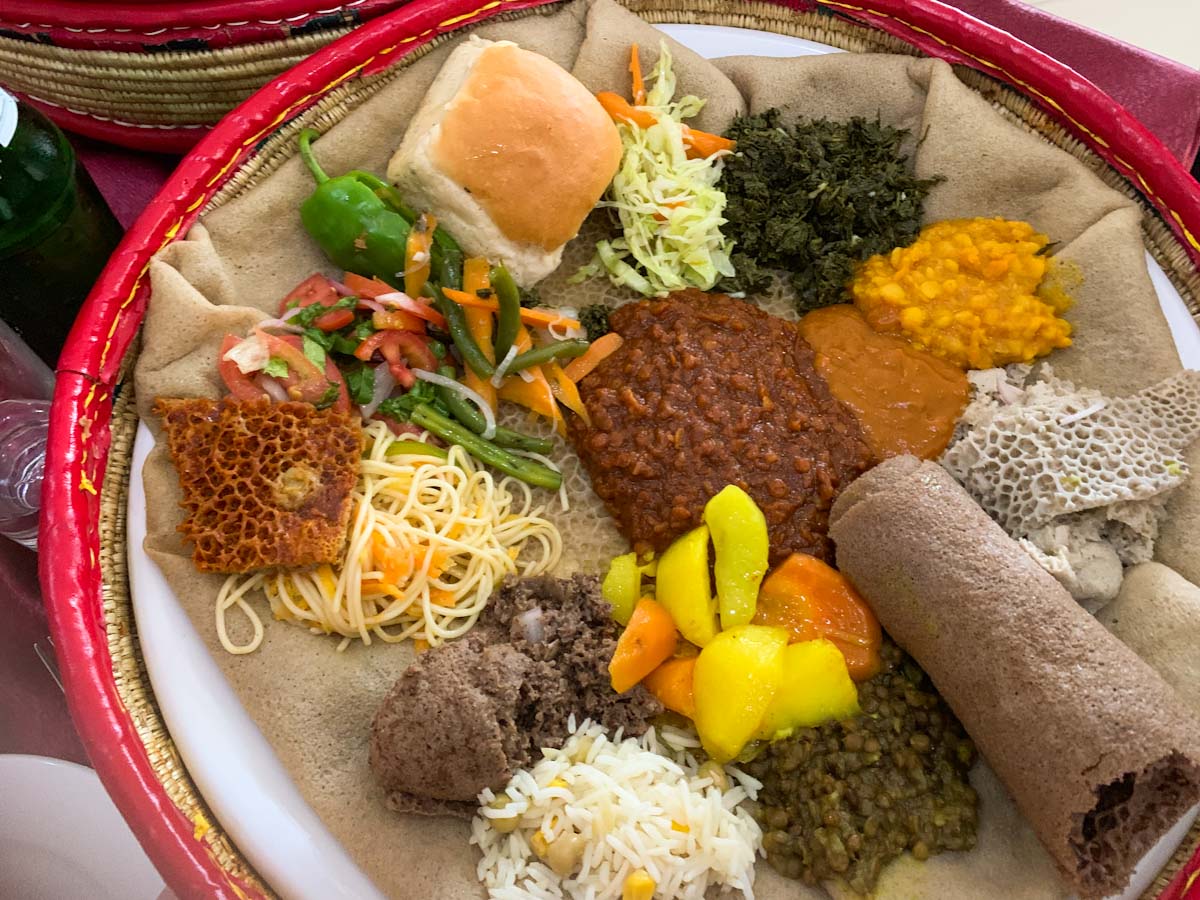 No Ethiopian meal should be without it: Injera is a soft flatbread that resembles a large pancake and has an incomparable taste. Heavy sauces are served on this bread, often based on berbere, a hot spice mixture. Once you have tasted injera and berbere, you will never forget these dishes…

For the dough of injera, the Ethiopians swear by teff (Eragrostris abyssinica), a grain that in Europe has only been known to connoisseurs. Full of minerals, vitamins and proteins, it is particularly valuable and nutritious. But harvesting and processing are laborious, because it is the smallest cereal in the world. Teff grains resemble coarse sand: 150 grains reach about the weight of a grain of wheat.

The ground teff is mixed with water and fermented for up to three days, which later gives the injera its typical sour taste. The excess water is poured off and the dough – again diluted and well stirred – is baked on an injera stove or over an open fire on a flat clay dish.

For the meal, people sit around the “mesob”, a colourful wicker table whose surface hollow is lined with injera patties. On this, the cook prepares vegetables and various “wot”: spicy sauces with meat or pulses, based on “berbere”. This is a mixture of spices that usually includes coriander, garlic, ginger, basil, fenugreek and a number of other indigenous Ethiopian herbs. However, the main ingredient is hot chillies, which are dried and ground – and make many European guests sweat.

Berbere powder – an important commodity in the markets

Ethiopians like to tell a legend about how the spiciness of their national spice is decisive for the history of the country. According to the legend, Menelik I, the first emperor of Ethiopia, owes his existence to the spice and a trick played by King Solomon: when the Queen of Sheba was Solomon’s guest, he immediately fell in love with her. Many times he asked her to marry him. But the queen refused. So the king devised a ruse. He said that he would no longer press her to marry him if she agreed not to touch anything in the palace. If she did touch anything, she would have to agree to become his wife. The queen agreed to this. However, after enjoying a meal cooked by the master of the house himself – with plenty of berbere – she felt so thirsty that she reached for a cup of water. And had to keep her promise.

Berbere is also used to prepare Ethiopia’s festive dish: “Doro Wot”, a chicken stew with lots of onions and hard-boiled eggs. Farming families can rarely afford meat, usually only on the high holidays. Therefore, their meal is usually much simpler: They often have injera with “shiro”, a thick sauce made from berbere, a powder of chickpeas, salt and oil.

People do not eat with cutlery, but always with their right hand, as good manners demand. You also don’t sit in front of your own plate, but eat together from a plate the size of a cartwheel. You tear off pieces of injera and use them to take up the thick sauces in the middle of the plate – which looks much more elegant to Ethiopians than to European tourists.

Injera can be made from many grains, sometimes the Ethiopians also use sorghum. But gourmets are convinced that the finest and best injera are made from pure teff. This grain therefore fetches good prices on the markets.

When farmers’ fields in the Fogera lowlands were flooded in autumn 2020, the foundation Menschen für Menschen was on hand with emergency aid: 880 families were given high-performance teff seed so that they could harvest in season after all. The harvest was ready in April and May 2021. “After the flood, our survival was at stake,” says farmer Shumete Yitbarek, a father of four. “Without the seed aid, we would have had to move to a town in search of work as day labourers.” Thanks to the harvest of 350 kilograms of teff, his family can now stay in their home: “We sell the teff to buy cheaper food like maize, besides clothes and school supplies.”