Zurich/Addis Ababa, 5 July 2021 – Abebech Gobena, long-time companion of our founder Karlheinz Böhm and project partner of Menschen für Menschen, has died in Ethiopia’s capital Addis Ababa at the age of 83. At the beginning of June, the philanthropist was diagnosed with a Corona infection. The “Mother Teresa of Africa” was then admitted to hospital and the ICU. Now the sad news of her death reaches us.

Sometimes a moment changes a life forever. Abebech Gobena experienced this moment when, at the age of 42, she undertook a pilgrimage to the north-east of Ethiopia: In 1980, Ethiopia was in the grip of one of the most devastating famines in its history. Abebech Gobena, a devout Christian, saw a dead woman by the roadside. Her baby was still at her breast. 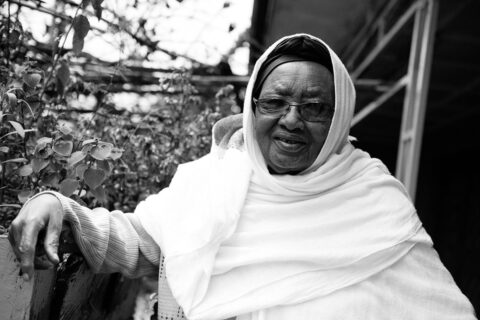 In an interview with CNN, Abebech Gobena described 30 years later how she spoke to one of the men assigned to collect the bodies. “The man said, ‘I am waiting for the child to die too so that I can pick up both bodies. I cannot bear to take the baby too while it is still alive.” To let the child die,  Abebech Gobena could not bear on the other hand: she took the little girl in her arms and with her to Addis Ababa.

More children soon followed. By the end of 1980, Abebech Gobena had taken in 21 orphans. “It was a terrible famine. The government at the time didn’t want the need to be known to the public. So I had to pretend the children were mine and smuggle them out,” Abebech Gobena told CNN.

She herself came from a very poor background. Her father died during the occupation by fascist Italy, the girl grew up with her grandparents. She was married off at the age of eleven, but fled from the forced marriage to Addis Ababa. For many years, Abebech Gobena worked as a simple clerk in a coffee trading company. She married again, the marriage remained childless. When she took in the numerous orphans, her husband gave her an ultimatum: “Either the children or me.”

Karlheinz Böhm met the philanthropist in 1991 – and was impressed by her work. Since then, Menschen für Menschen has supported Abebech Gobena and her organisation Agohelma. In the meantime, almost 250 employees work in the most diverse initiatives, which are made possible by Menschen für Menschen as the main donor. In addition to the children’s home with currently 34 orphans, Karlheinz Böhm’s organisation supports malnourished young children with a feeding programme. Their mothers regularly receive high protein food. Every year, around 250 poor women receive vocational training.

Daniel Hunn, the then Swiss ambassador to Ethiopia, was impressed when he visited one of the key projects in September 2019. Around 80 women welcomed the ambassador and MfM Managing Director Kelsang Kone in their training kitchen. In a six-month course, they are trained as cooks and home economists. “As Swiss Ambassador, I am proud that so many of my compatriots support your valuable efforts by donating to Menschen für Menschen,” said Hunn.

Just at the turn of the year, the mayor of Addis Ababa, a city of millions, had visited Abebech Gobena’s projects. “Through their humanitarian efforts to rescue poor and needy children, Abebech Gobena is a beacon of hope and generosity so much needed by the world,” said Mayor Adanech Abiebie during her visit to the children’s home, whose operations are financed by Menschen für Menschen. “Abebech Gobena’s vision would not be a reality without the generosity of partners and donors. On behalf of the citizens of Addis Ababa, I thank all those who contribute to this outreach to the disadvantaged.”

Now the philanthropist’s impressive earthly life has ended. Four weeks after contracting Covid-19, Abebech Gobena died at St Paul’s Hospital in Addis Ababa on the morning of 4 July, aged 83. “I am deeply saddened,” Prime Minister Abiy Ahmed shared on social media. He said Abebech Gobena was “Ethiopia’s icon of compassion”. The “Washington Post” wrote in an obituary: “With innovative fundraising, and with aid from foreign organizations including the Swiss group Menschen für Menschen, she built a nonprofit organization that served thousands of children, providing shelter, sustenance and schooling.“

“A person’s light can continue to shine even after death,” emphasized MfM Executive Director Kelsang Kone. “Karlheinz Böhm said: what you have done in your life lives on.” Abebech Gobena, he said, was seen by the founder of Menschen für Menschen as a kindred spirit in their commitment to a better world. “Menschen für Menschen will continue to support Abebech Gobena’s organisation Agohelma in its beneficial work and carry on the ideas of our founding personalities”.